With other transport modes - road/air/sea - decarbonisation depends on progress in on-board power technologies that do not need fossil fuels. Rail is unusual in that decarbonisation can be achieved by electrifying the track, not the trains. Current on-board technologies should be sufficient to replace most non-main-line diesels in England, and over the next 5-10 years battery technology should advance to outperform diesel in all respects, bringing all lines in Britain within range. At the same time, main lines with higher passenger numbers and performance requirements justify electrification of tracks.

As with other transport modes, if the objective is to reduce carbon emissions, old diesel trains can be replaced with new ones; alternatively, existing diesel engines can be replaced with modern ones. Modern engines are much more efficient, so this can significantly reduce emissions (and save on fuel costs). However, if the objective is to remove diesel altogether, then this does not solve the problem and is merely a stopgap. Increasing numbers of diesel bi-mode trains are appearing on British lines. These can run on both electrified and unelectrified lines, using the external power source where available and the on-board diesel supply when not. These are clearly an improvement on running diesels under overhead wires (OLE), but are also not a long-term solution and will have to be replaced by non-polluting sources. In any case, you can accomplish the same thing by getting passengers to change trains when the power source changes, so the main advantage of bi-modes is the convenience for passengers of not having to do that. The only real solution is to replace all diesel engines with electric.

Electric motors are simpler than diesel and therefore require less maintenance; they are lighter, generally faster and quieter, with better acceleration, besides not polluting at point of use. They also have the advantage of being able to make use of regenerative braking: by using the motor in reverse, it acts as a generator, converting the kinetic energy of the vehicle into power which can be returned to an external power supply or stored, either electrically (in a capacitor), chemically (in a battery), or mechanically (in a flywheel). This also reduces the use of frictional brakes, which in turn reduces the harmful particulates these produce.

Power from outside: electrification of track

This has increasingly been used in most European countries in recent decades, though currently only Switzerland's track is fully electrified. In most places, this takes the form of overhead cabling, though Britain is unusual in having a large amount (roughly one-third) of third-rail (DC) electrification, mainly in the SE but also around Liverpool. This is lower-powered, and so means trains have lower top speeds; it also complicates train design, as any train on a route with both types of supply has to be able to draw power from both sources.

The Electrification Cost Challenge recommended "two to three delivery teams consistently in action each delivering 75-100 single track kilometres (stk) per annum, for at least 10 years", i.e. up to 300 stk a year, for some 3,000 stk over 10 years. It also should be said that electrification is often part of a larger update to a line, where bottlenecks and other pinch points are removed, signalling/junctions improved, and so on, before electrification is installed. On some lines, this work could well be as great or greater than actual electrification, considerably increasing the time taken.

Power on the train

As stated above, it makes sense for trains with an electric motor to make optimum use of regenerative braking:

In the absence of external recharging facilities, train routes with longer stretches of unelectrified track need to carry an auxiliary power source to recharge the battery. This can be:

All transport modes could, like satellites, use solar power for at least some of their power needs, and the Byron Bay train south of Brisbane recharges its batteries entirely from solar cells. Sono Motors' Sion car, due in mass production in 2023, includes solar PV in the body, which is claimed to add a range of 100+km a week - which for urban runabouts is probably all that's needed. Sono also offer to add solar PV to the roof and sides of commercial vehicles, and they say they're in discussions with a train manufacturer too. The British company TRAILAR can also do this, with ongoing trials with several bus companies. Perhaps in the future, this may become more mainstream.

Energy: diesel vs battery vs capacitor 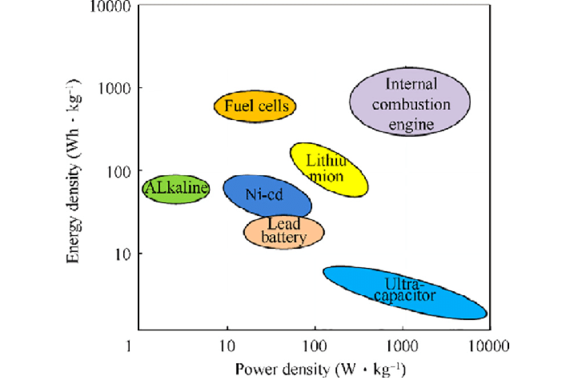 The diagram (from Researchgate) provides a clear rough comparison of the different energy sources. Energy density is the amount of energy stored - how big the bottle is - whereas power density is the amount of energy that can flow in and out at once - how big the bottle opening is. Traditional combustion engines score comparatively well on both counts. Super/ultracapacitors can deliver (or accept) a lot of power at one go, but the power soon dissipates through the large 'opening'. Li-ion has the best combination of current battery types, having a reasonable size of both bottle and opening. They are thus usable for smaller/lighter vehicles which don't need large power. The higher the energy density, the further the range for a given size or the smaller/lighter it can be for the same range. Large HGVs or freight trains on the other hand need more power and/or a larger/heavier battery. However, Berkeley Lab, one of the leading groups researching advanced battery technology, estimate in a recent study that a US freight train fitted with a separate battery tender could run for 150 miles (240km) without having to be recharged, at half the cost of diesel (US freight trains are generally much longer and so heavier than British ones). The US company Wabtec is working on a battery locomotive called FLXdrive, which can be used in conjunction with a diesel one to lower emissions. As batteries increase in efficiency and decrease in cost, size and weight, they should be able to replace diesel locomotives altogether.

Solid-state batteries (i.e. those that use solid materials instead of liquid) potentially increase the energy density manyfold.

Although, as shown above, hydrogen has a better energy density than current batteries (and liquid hydrogen even better), it does not occur naturally, and has to be manufactured. Fully decarbonised 'green' hydrogen is produced from electricity by water electrolysis, and then converted back into power by reversing the process. This means that a large amount of the initial power input is lost in the process, as shown in the diagram below (from Transport & Environment). It's likely that electrolysis will improve in efficiency over the next few years, but how viable it will be in the longer term remains to be seen.

Hydrogen is lighter than current batteries, but bulkier, meaning the storage tanks require more space. The bulk can be reduced by using liquid hydrogen, but this also adds to the cost of production.

Scotrail estimate that as of 2021 electric, battery-electric and hydrogen multiple units cost respectively £1.32, £1.62, and £2.46 per mile to operate. A 2020 study funded by the German government found that battery trains could be some 35% cheaper to buy and operate than hydrogen ones.

A lot of money is currently being spent on research, particularly into how to improve these technologies, particularly batteries. This won't happen overnight, but it seems a safe bet that those in 10 years time will be much changed from existing ones. They may also be substantially cheaper per unit of power.

Research at present is concentrating on: